Why I think this paper matters:
Information Processing and Ecological Dynamics are two separate schools of thought in motor learning and their proponents are well-entrenched in their positions. The two-stream system may well be an opportunity for each side to compromise a little in the name of more accurately describing how skilled movement happens.
"In the course of action the activity of the ventral and the dorsal systems must be synchronized in a meaningful way such that they can work together. The interaction is reciprocal in that the ventral system constrains the contributions of the dorsal system, and the dorsal system may also affect the workings of the ventral system" (p. 120).

Occasionally, a journal will focus on a specific topic for an entire issue and sometimes that topic is a specific article that all the other articles in the issue respond to. In this case, the target article is "Ventral and dorsal contribution to visual anticipation in fast ball sports" by John van der Kamp, Fernando Rivas, Hemke van Doorn, and Geert Savelsbergh.

Highlights (target article):
- The authors of the target article are building on the work of Milner and Goodale, who have written books and articles about the "two visual stream system". There is a great deal of neurological evidence that visual information enters our eyes and then goes in two different "directions", ventrally and dorsally, once it hits our brains. Each stream specializes in different kinds of information.
- "The ventral system is involved in perception of objects, events, and places. As the ventral system gains knowledge about what the environment offers for action, it can also contribute to action" (p. 102).
- "The dorsal system is designed to visually guide movement execution" (p.102).
- The authors' use of the term "knowledge about" is important because it contrasts with "knowledge of" the environment. They intend to show that each system is better at managing certain kinds of information. I think this is an opportunity recognize that each system needs the other in order for an athlete to perform many skills, especially in ball sports.
- The ventral system is allocentric, or world-centered, while the dorsal system is egocentric, or body-centered. These terms further reinforce the distinction between "knowledge about" and "knowledge of" the environment.
- For me, the most important part of the target article is figure 3 (p. 109) in which the authors propose that "in the course of action the ventral and dorsal systems show parallel engagement". So the two systems work alongside one another.
- The authors show that many experimental results that are intended to support the information processing point of view are likely incomplete because they only allow the implementation of the ventral system.
Highlights (Abernathy and Mann article):
- The fact that many experimental results don't engage the dorsal system has been "largely a consequence of methodological constraints rather than necessarily a strong, conscious commitment by researchers" to uphold a particular philosophical view (p. 137).
- A main difference between experts and novices is probably that the expert's dorsal system is better attuned to their environment (p. 138).
- We must be careful to recognize the difference between errors of "poor pick-up of advance information" and errors of "poor response selection strategy" (p. 140). Did two athletes see and interpret something differently or did they see the same thing but selected different solution strategies?
While there were plenty of ideas I took away from the other commentaries, I think they are more specific to my personal learning so I won't take anyone else into the weeds with me.

What I'm left wondering:
- The commentaries are written from an Ecological Dynamics viewpoint. What would Information Processing commentaries look like?
- In volleyball, we often talk about defenders needing to be stopped/balanced when the opponent attack happens. I find information in the target article that suggests that movement during opponent contact could be either helpful or hurtful. How can I better understand when movement at opponent contact is useful?
- Araújo and Kirlik's article draws a distinction between "representative design" and "ecological validity", writing that many researchers use the latter term when they are really talking about the former (p. 163). I still don't think I understand the distinction.
- Probably the largest question I am left with is if the two motor learning camps have made any movement towards each other and if the two stream system is part of such compromise. As primarily a practitioner, I tend to be more pragmatic in my approach to these theories. I want to use what gets results, meaning the best learning and skill performance. I don't know how to do that in a way that doesn't run afoul of one of the two world views. A coherent, consistent framework is very important to me as a coach so I find this dissonance difficult to reconcile within the realm of my practice.
at December 19, 2020 2 comments:

Why I think this paper matters:
- Using the metaphor of wayfinding for skill adaptation can be a very helpful tool for translating from formal academic language to something easier for practitioners (coaches, teachers, learners) to absorb, understand, and apply.


Highlights:
- A definition of wayfinding: "...wayfinding is an activity that confronts us with the marvellous fact of being in the world, requiring us to look up and take notice, to cognitively and emotionally interact with our surroundings" – M.R. O’Connor (p. 1)
- Wayfinding is contrasted with transport, "where an individual is more interested in reaching a pre-planned destination by transiting 'across' a landscape, as opposed to moving 'through' a landscape" (p. 3). It is more important to experience the landscape.
- The idea of knowledge of is contrasted with knowledge about the landscape in which the wayfinder moves. (To be clear, the "landscape", in this case, is metaphorical, like a "solution space" or a realm of possibilities. This is not talking about how the learner actually moves through physical space.)
- The role of the teacher as landscape designer, in which they create opportunities for learners to "learn to learn how to move" rather than problem-solvers for the learners.
- The role of the teacher as asker of questions rather than explainer of answers to the learners.
- "...wayfinding isn’t knowing before we go, but, knowing as we go" (p. 10)

What I'm left wondering:
- How do I know if the landscape I design is working? If learning is nonlinear and questions should have physical answers instead of verbal ones (p. 8), how do I assess that the learners are seeing what they need to see? What if they are focusing on useful sources of information in the environment but moving in ways that don't get them closer to their goals? How do I get at that discrepancy?
- How does this metaphor fit in with tasks that are less physical (more cognitive) in nature, like remembering an opponent's tendencies?
at December 05, 2020 No comments:

We're Ruining Mindfulness with How We Do It: Ronald Purser's McMindfulness - A Short Review

We have a mindfulness problem. But it isn't the one you would think of, or that popular culture and media would have you think of. We ... 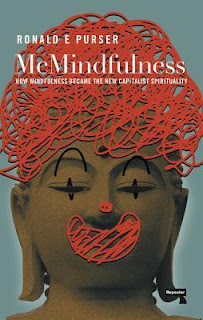