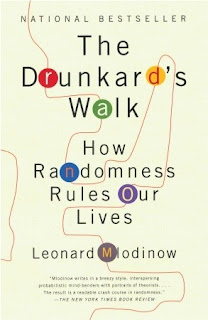 Socrates is credited as saying that, "all I know is that I know nothing" and, after reading Leonard Mlodinow's The Drunkard's Walk, I feel like I should probably have that tattooed on my arm as a constant reminder. Mlodinow's thesis was certainly not to make readers feel like the world is unknowable so my assertion needs a great deal of context.
The author, a Caltech physicist, strives to give readers access to several of the statistical concepts that underpin our modern lives. Along the way, he also dispels many of our illusions about how well we think we understand the world around us. It isn't that the world is too complex, nor is it that it is completely random. When complexity and randomness are coupled, which is more often than we care to accept, then we need to admit that all we know is that we know nothing.
Mlodinow makes a convincing argument when he writes about stock market investors and prognosticators (chapter 9). We want to believe that it is possible to strategize our way into large returns on our investments. "Research has shown that the illusion of control over chance events is enhanced in financial, sports, and, especially business situations when the outcome of a chance task is preceded by a period of strategizing, when performance of the task requires active involvement, or when competition is present" (p. 188). We tend to fall victim to the Texas sharpshooter fallacy but how we do so isn't always clear to us. If we view an investor's run of good results as improbable, that may be, to some extent, accurate but we need to recognize what is actually improbable. If we had, prior to the run of success, asked "what is the probability that this exact investor has this much success in this exact time frame?" then the chances are small. The problem is that we have ignored a great deal of randomness to anoint this one person. When we view the results after the fact, the correct question to calculate the probability of that success would actually be, "how likely is it that any investor has that much success in any period of similar length?" Viewed in this way, I feel like the only appropriate reaction is to say, "it was only a matter of time".
Another important lesson for me in this book is about what it means to say that an outcome is out of the ordinary. This is particularly hard for me to comprehend because of how commonly we talk about "statistical significance" and calculate p-values to show that things we have observed are far enough from the average to be interesting. Mlodinow wasn't trying to tear all of that down but he did succeed in changing the way I frame such calculations and discussions. When I calculate that something is statistically significant, I have not determined that the outcome was nonrandom. I have calculated that the outcome is very unlikely to happen. We then tend to infer from that calculation that the outcome was nonrandom rather than just rare. This, to me, is an expression the "illusion of control" I mentioned above. For example, I have a solitaire game I like to play on both my phone and tablet. On the tablet, I have won 46% of the games I have played while I have won 50% of the games I have played on my phone. It's the same game and the same player so shouldn't the percentages be about the same? Only if I have more control over the outcomes than I really do. Maybe I screwed up some chances to win but it is much more likely that I just didn't get as many deals that were winnable and that's random. If I reset the stats on both devices and started over, it is likely that the percentages would still be different but it's hard to say just how different they would be.

In my job as a Technical Coordinator, I work with athlete performance statistics and one could argue that my job is to draw conclusions with certainty because those decisions are based on statistics and math. As I have sometimes put it, "I'm right because I have a pile of numbers". Mlodinow helps me keep myself intellectually honest when he quotes Jakob Bernoulli: "one should not appraise human action on the basis of its results" (p. 100). It's not that I can't or shouldn't do my job, it's that I need to include the appropriate caveats when I do. It's important that I provide context about how rare or random an outcome may be. It's important that I can give nuance to the balance between what is chaotic and what is controlled.
at July 19, 2020